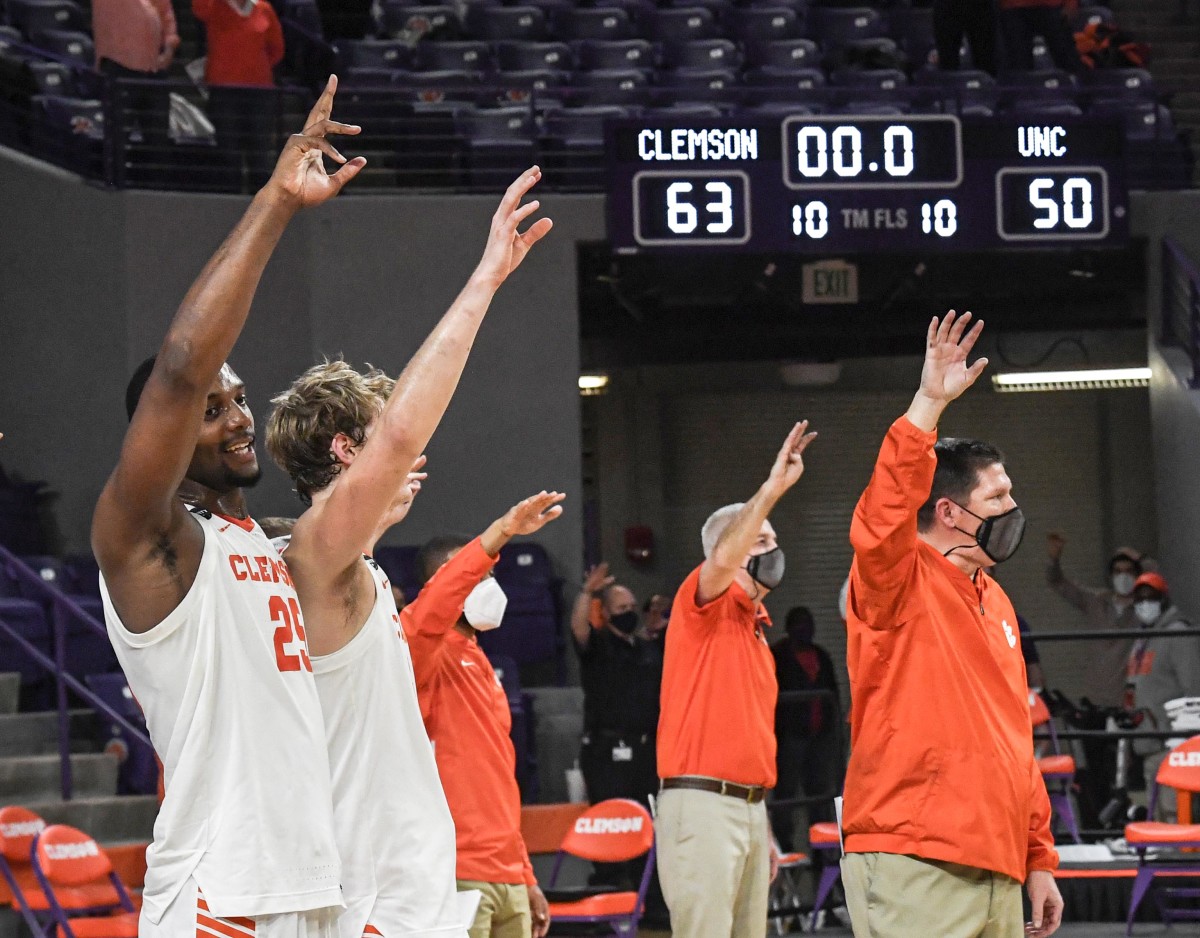 CLEMSON—When Brad Brownell’s Tigers needed a win the most, they got one as Clemson downed North Carolina 63-50 at home on Tuesday night.

Brownell’s team had not only lost four of their last five games, they had been blown out in all four of those losses. However, on Tuesday night the Tigers looked more like the team that won nine of their first ten games.

“Our guys, you know, we’re really ready,” Brownell said after the win. “And I thought we competed extremely, extremely hard. I thought our guys played with great physicality. I thought we covered all the areas tonight.”

The Tigers led throughout, going up by as many as 16 at one point during the first half. While Clemson took a 33-21 lead into halftime, the Tarheels slowly chipped away at that lead throughout the early parts of the second half, pulling to within 42-38 with 12:38 to play.

Hunter Tyson would then nail a three-point shot to extend the lead back to seven, ending the threat. North Carolina got back to within five points on two occasions but were never able to get any closer.

“We knew coming into the game that we were really gonna have to fight on the defensive end,” Tyson said. “Coach really just emphasized that this was going to be a fighting effort and that we all had to do it together. It wasn’t a one on one, everybody got in there, man. So we just really came together and stopped them as a team.”

Tyson led the Tigers with 16 points on 5-11 shooting, including going 2-5 from beyond the arc. Clyde Trapp added 14 points and a team-high 9 rebounds. Aamir Simms pitched in with 10 points, giving Clemson three players in double figures. Simms also had 6 rebounds and 6 assists.

After a two-week stretch that saw the team not even be competitive in four of their past five games, Clemson turned in one of its better efforts of the season on Tuesday night against the Tarheels. The Tigers aggressive defense held North Carolina to just 5-19 on three-point attempts and just 39% shooting overall. Clemson also forced 17 turnovers in the game.

“To be completely honest, coach just said how disappointed he was in like our effort in the last five or six games we played,” Simms said. “And he just challenged us mentally and physically. He really wanted to see if we could go out there and play the team he knew about in the beginning of the season and he just really challenged us going into this game.”

Clemson improves to 11-5 on the season and 5-5 in ACC play, while North Carolina drops to 11-6 and 6-4 in league play. The Tigers have now won three out of their last four over the Tarheels.

Player of the Game: Hunter Tyson led the Tigers with 16 points, including hitting two big three point shots in the second half that were key in the win.

Freshman Impact: Olivier-Maxence Prosper had a solid game for the Tigers. He scored 3 points and played solid defense in his 10 minutes of action.

Up Next: Syracuse is scheduled to visit Littlejohn Coliseum on Saturday, with tipoff scheduled for 2 pm. The  game will be televised on the ACC Network.

how to start a business