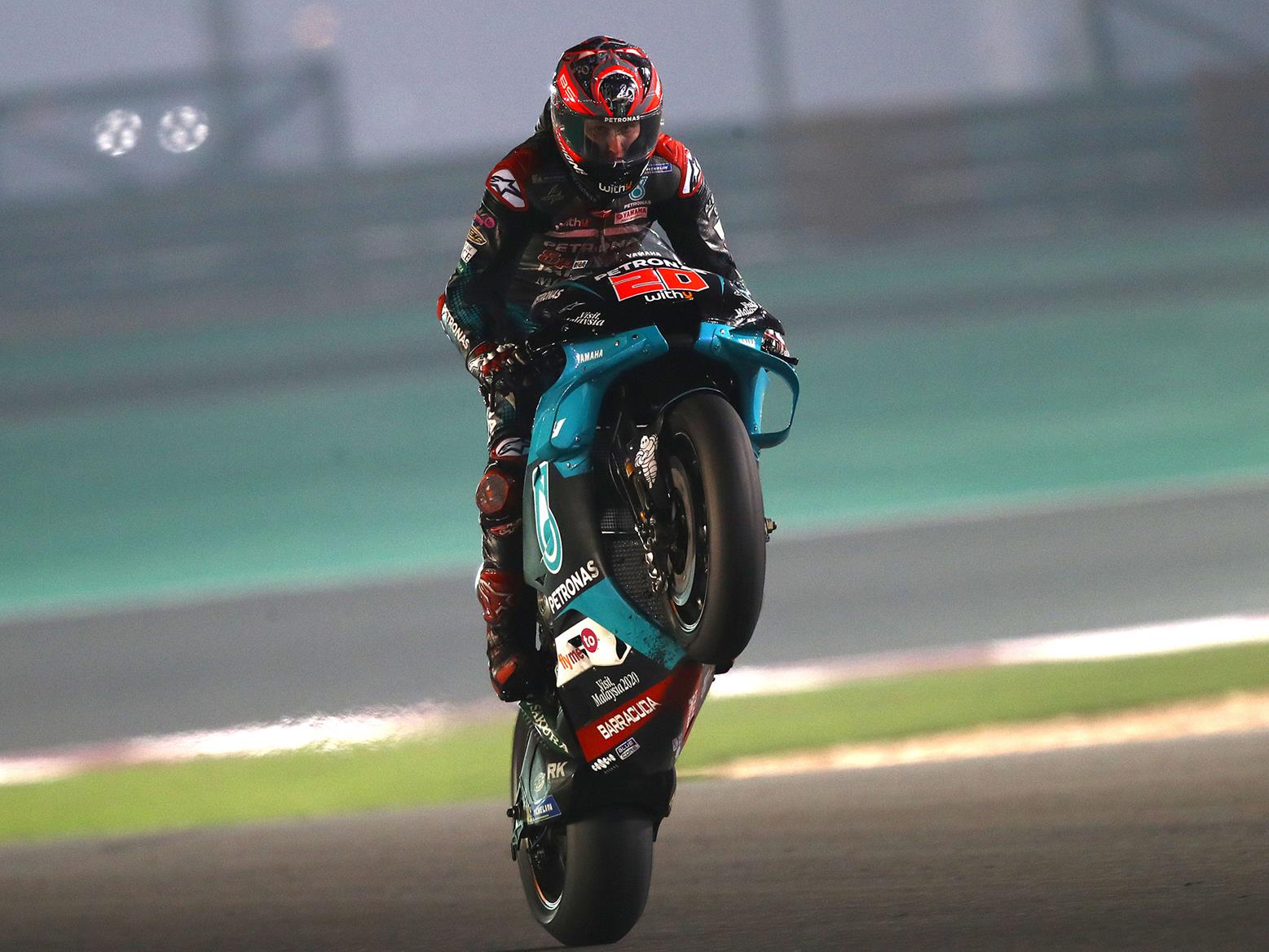 Fabio Quartararo leads the way in Qatar after the second day of testing at the Losail International Circuit.

The Petronas Yamaha man hit the top of the timing sheets with a 1:54.038, which was 0.162 quicker than Alex Rins, who finished quickest yesterday.

Maverick Vinales continued his impressive form to finish third for the second consecutive day. The Spaniard ended the day +0.226 behind Quartararo, completing another 68 laps on the Yamaha.

Franco Morbidelli made it three Yamahas inside the top four after completing 70 laps on his M1 – more laps than anybody else on day two. Francesco Bagnaia was the fastest Ducati rider in fifth.

Johann Zarco made significant progress on the Avintia Racing Ducati to end the day sixth. The two-time Moto2 champion is continuing to adapt to his GP19 and was only +0.527 off the pace. The Frenchman was also quicker than both factory Ducati riders.

Joan Mir dropped down to seventh, with Andrea Dovizioso and Valentino Rossi in eighth and ninth respectively. Takaaki Nakagami enjoyed his strongest day of pre-season testing to end the day as the fastest Honda rider in 10th. Onboard the 2019 bike, Nakagami completed 43 laps in total with a fastest lap-time of 1:54.759.

It was a tough day for Marc Marquez, who is still struggling with his shoulder. The eight-time world champion also suffered a big crash at turn nine. Marquez ended the day down in 14th after completing 46 laps.

Cal Crutchlow also suffered once again on the Honda. The Brit also crashed at turn two and could only complete 27 laps.

Iker Lecuona was the quickest rookie in 18th spot, +1.606 off the pace. Alex Marquez and Brad Binder both crashed and ended the day in 19th and 20th respectively.

MotoGP: Suzuki in control after day one of the Qatar test

Alex Rins topped the first day of the Qatar test after producing a 1:54.462 with around five minutes remaining on the clock.

The Suzuki rider made a late appearance to the test, with Rins waiting for the conditions to be as close to those found at the opening round of the season at Losail. The race in Qatar takes place under the floodlights.

His Suzuki teammate, Joan Mir was in second, only +0.002s behind the two-time MotoGP race winner. With the Suzuki already believed the be the best complete package, today’s results will have no doubt caught the other team’s attention.

The top three were covered by +0.032s, with Maverick Viñales in third spot. The Monster Yamaha rider completed 50 laps on the opening day of testing.

Danilo Petrucci was the leading Ducati rider in fourth spot. The Italian manufacturer were spotted working on an evolution of the holeshot device throughout the day. Replays appeared to show that their riders can lower the rear of the bike on the exit of corners by flicking a switch on their handlebar.

Franco Morbidelli was fifth on the Petronas Yamaha bike, ahead of reigning champion Marc Marquez. The Repsol Honda rider, fresh from signing his new four-year deal, completed 42 laps as he continued his recovery from shoulder surgery.

Valentino Rossi and Fabio Quartararo finished the day in seventh and eighth places respectively. Francesco Bagnaia and Aleix Espargaro completed the top 10, with the top 10 riders covered by only +0.806.

Andrea Dovizioso was 11th overall, however the Italian did suffer another crash on the Ducati. Last season’s runner-up fell at turn nine, adding to his tally of test crashes in 2020.

Pol Espargaro was the top KTM rider in 14th, whilst teammate Brad Binder was the quickest rookie on day one. Fellow rookies Iker Lecuona and Alex Marquez were 20th and 21st respectively.

Cal Crutchlow ended day one down in 19th. The LCR Honda rider completed 50 laps and was +1.295 off the pace.