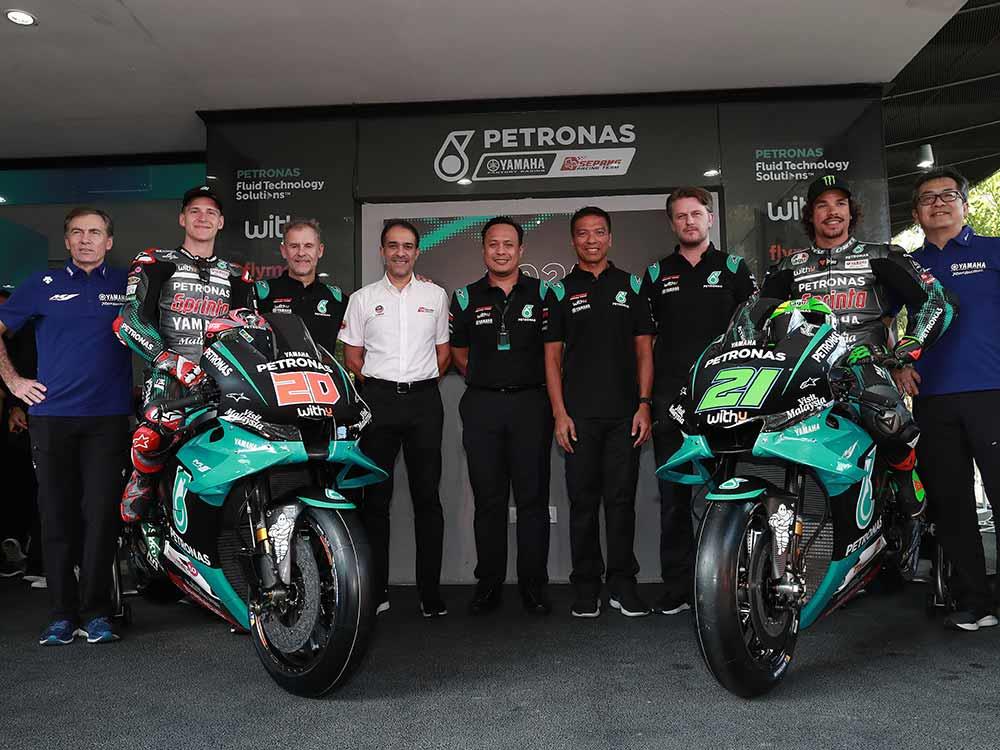 The Petronas Yamaha team have revealed their 2020 MotoGP livery ahead of their second campaign in the premier class.

A special presentation took place at the team’s home circuit at Sepang, with Fabio Quartararo and Franco Morbidelli both present. Yamaha’s managing director Lin Jarvis was also involved, following the launch of the factory team’s livery earlier in the day.

This year’s livery once again features the black and teal colours of Petronas, with an alternative layout to the 2019 bike. Petronas Yamaha enjoyed a successful debut year in MotoGP, winning the Independent Teams Championship.

Quartararo’s rookie season was also one to remember. The Frenchman finished on the podium on seven occasions and also secured six poles on his way to fifth in the standings – ahead of Valentino Rossi.

The 20-year-old was rewarded last week when he was given a two-year contract with the factory Yamaha team. The move sees him replacing Rossi, who is yet to decide his future.

“Obviously, it’s been a positive off-season for me being able to get my future determined and this means I can focus completely on the twenty races ahead which is very beneficial,” Quartararo said. The support from PETRONAS and Yamaha is great and I’m looking forward to riding the Factory bike over the races ahead.

“After finishing 2019 with podiums and taking great results, I hope to be fighting in the top five again, targeting podiums and looking for wins. I don’t have any goals for the championship, my approach is race-by-race, trying to finish on the podium. The next step is to see the potential of the bike here at Sepang and this will give us a clear idea about what we can expect from the season ahead.”

Quartararo will have a factory-spec 2020 Yamaha YZR-M1 at his disposal this season as he looks to secure his maiden victory.

Meanwhile, Morbidelli will be working with an A-spec M1 as he looks to improve on his results last season. The Italian achieved a best race finish of fifth on four occasions and also started from the front-row four times.

“My target is to improve last year’s results and improve myself in every way possible,” Morbidelli commented. “I’ve been concentrating on general conditioning and improving my fitness so that I can do everything at my best to face this season well-prepared. It’s been a good off-season and I’m rested and refreshed as well as being very eager to get back on the bike.

“In particular, looking at the races ahead, I want to improve my race pace. Last year I was fast in practice and close to the top riders on Friday and Saturday, but on race day it was different. I wasn’t able to match the top guys in the races. In 2020 I want to make this step up. The start of this is testing over the next three days so I can’t wait to get started.”

The specific differences between Quartararo’s ‘factory-spec’ and Morbidelli’s ‘A-spec” bikes are not yet known. However, the air intakes on both bikes were significantly different at the team’s presentation.

The team’s focus will now switch to the three-day official test at Sepang, which gets underway tomorrow.