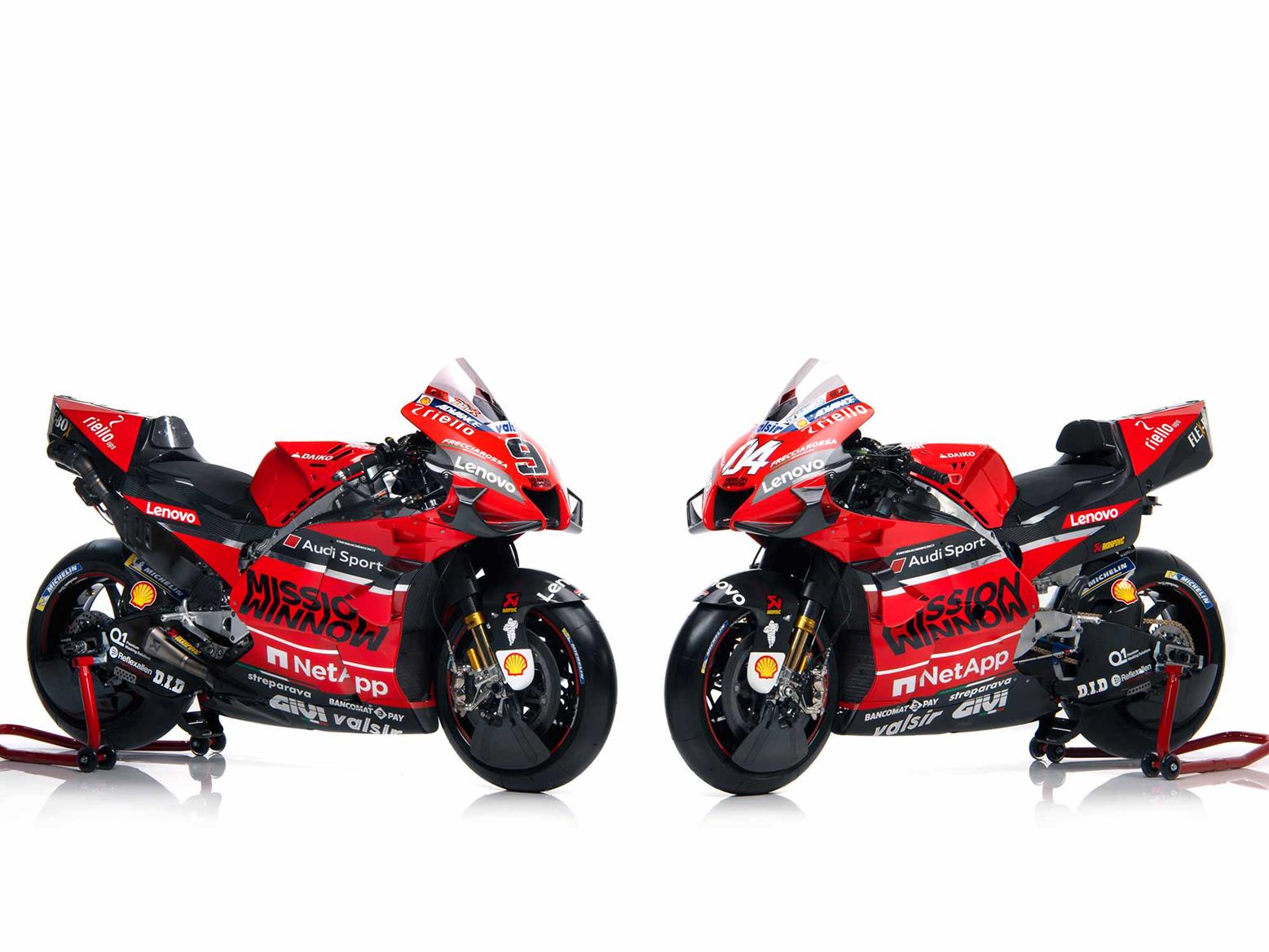 Ducati have unveiled their 2020 MotoGP livery in a special presentation held at the Palazzo Re Enzo, Bologna.

Andrea Dovizioso and Danilo Petrucci were joined by Ducati Motor CEO Claudio Domenicali and Ducati Corse General Manager Luigi Dall’Igna to reveal the colours that the Desmosedici GP20 will wear.

Ducati have continued their recent tradition of making clear changes to the livery. The bike keeps the darker red tone of last year’s bike, however the majority of the white details from 2019 have been replaced with black and chrome. The Audi Sport logo is much more visible this year too.

As with most pre-season livery presentations it’s likely that the bike on show was actually the GP19 machine. Most of the new parts won’t be on show until testing resumes at Sepang next month.

Dovizioso has also changed his helmet for 2020, with the black and white horses, representing the symbols of reason and instinct, being replaced by the Pegasus.

“Every year has its own story, and it is not easy to predict what will happen in 2020,” Dovizioso said. “Our goal is clear; we want to challenge for the title again. Both Ducati and I are working hard to be back stronger than ever before. Compared to last year, I expect to find more competitive rivals, but we have also grown a lot, and I am confident that we will be able to continue with our positive trend.”

Meanwhile Petrucci remains with the factory team for a second campaign. A fantastic start to 2019 saw him secure his maiden win at Mugello, however he struggled throughout the second half of the season.

“It was my best season in MotoGP in terms of results,” Petrucci said. “I took my first win in Mugello in a fantastic race in front of my home crowd and all the Ducati fans. This result boosts my confidence and motivates me to improve even more this year. I know our rivals will be back stronger this year, but that counts for me too.”

“I have been improving and growing each season, and this year I want to confirm my results and make further steps forward compared to last year.”

After finishing as runners-up to Marc Marquez for the last three seasons Ducati know that 2020 is an important year. The pressure is increasing on the factory and also on the riders, who are both out of contract at the end of this season.

“We can’t say that we are completely satisfied as our ultimate goal remains the same: winning the championship title,” Dall’Igna commented. “2020 will be even more intense and demanding with twenty races scheduled in the calendar, and our rivals will be even more competitive. That is why we all need to increase our commitment.

“For this reason, we have been working harder during the winter to offer to Andrea and Danilo a Desmosedici GP20 bike that will allow them to become leading contenders in all races and all conditions.”

The Ducati team’s first official outing in 2020 will be at the Sepang test on February 7-9.