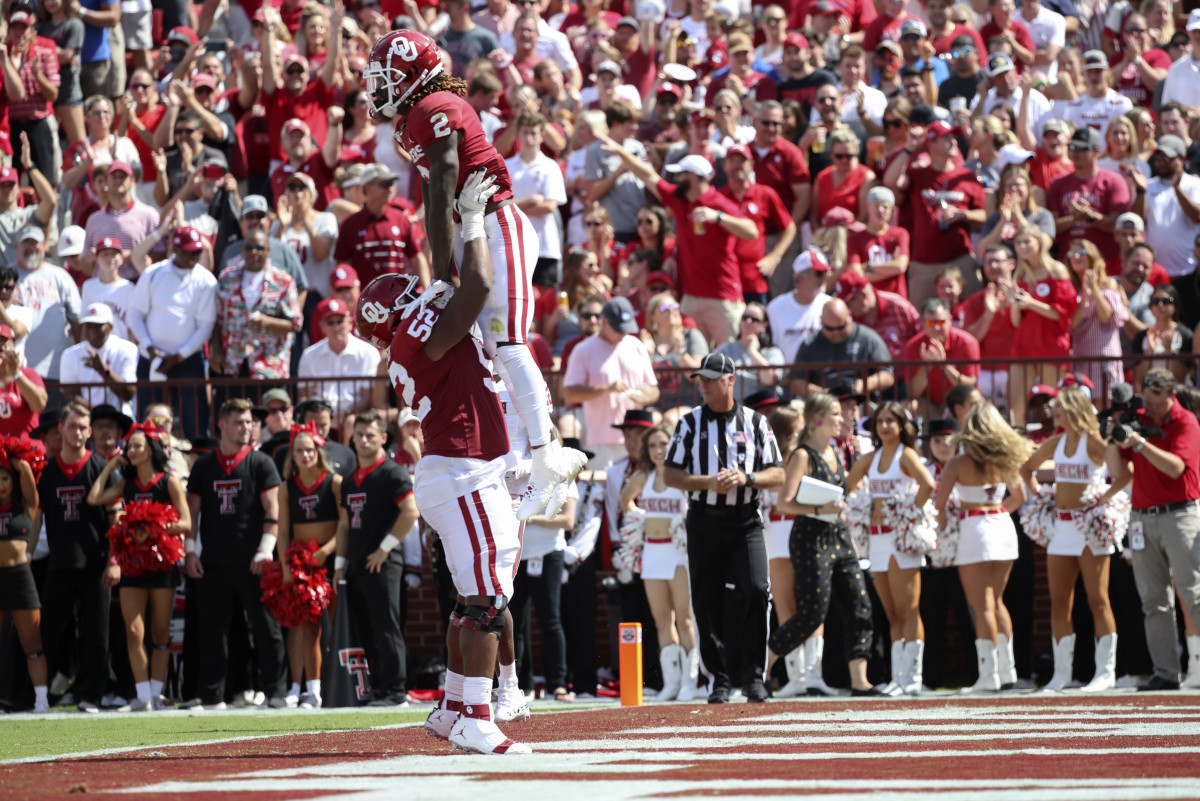 After seven long years, college football fans got the announcement they’ve been waiting for.

The game is not expected to be launched anytime soon, as it is just in the early stages of development. EA Sports also announced they would ditch the “NCAA Football” moniker, instead calling the revamped franchise EA Sports “College Football.”

In the short term, don’t expect current rosters either. As a workaround until Name, Image and Likeness legislation is implemented, the franchise will use generic rosters instead of mirroring the real roster as they have in years past.

While the internet stopped to celebrate the announcement, it could be hard for Sooners fans to look back and not regret the memories they were robbed of. Despite winning back-to-back Heisman Trophies, neither Baker Mayfield nor Kyler Murray got to grace the cover of the game.

The disembodied voice of Kirk Herbstreit never got to condemn users for running up the score with Oklahoma’s historic 2017 and 2018 offenses.

Plenty of stars have graced the field in Norman who never got to realize their full potential in the NCAA Football ecosystem, and here are our picks for the top 10 players OU fans were unable to dominate their friends with every weekend.

Let’s be honest, nobody played the NCAA College Football games to play defense. As a result, tons of gamers just played as a defensive lineman and tried to wrack up sack numbers. Enter defensive end Ronnie Perkins. Perkins would have been the perfect end to try and chase a Heisman with. His speed and power off the edge would allow players to mash their controller endlessly to get the jump on offensive tackles. The addition of Perkins just might have convinced some to forgo simulating defense all together, and playing the entire games.

While OU fans can just pick up the latest Madden and play as the Baltimore Ravens to get their Mark Andrews fix, let’s face it — NCAA just hit differently. Andrews would have been any gamer’s get-out-of-jail-free card, just throwing up jump balls to Andrews over the middle every third down. But his real value would have been when four verticals was called. His ability to patrol the middle of the field, and then truck-stick any defenders after the catch, would have made Andrews a must-play in NCAA Football.

Though Eric Striker did actually appear on NCAA 14, Oklahoma fans never got to play with him when he got the proper respect from the ratings team. Like taking Perkins all the way to 11, Striker could have set career sack records in just a season with his blistering pace rushing the quarterback off the edge. A disadvantage on the actual football field, Striker’s smaller size would have actually made for a more eventful gameplay experience, as he would have been the designated “dive guy” to chase down busted plays.

The often forgotten Heisman Trophy finalist, Dede Westbrook would have been an amazing deep-play threat to unleash on opposing defenses. And the Westbrook fun wouldn’t end at just throwing it to him down field. Slotting Westbrook as the kick returner and punt returner would have ensured big play ability just about anytime the Sooners were getting the ball back. Westbrook isn’t the only burner on this list, but he may be the best in terms of running a go route and just heaving the ball as far as you could.

Some running backs have the speed, some can lay down devastating jukes, and others live and die by the hit stick. Joe Mixon is the rare back who could do all three, making him the perfect video game runner. Not only would he have been devastating on the ground, anytime a user found him out of the backfield, Mixon could have housed it. Lest we forget, Mixon would have made any fourth quarter blowout must watch. All you have to do? Slot Mixon in at quarterback and run the option the rest of the game. Entertainment gold.

No guy on this list would result in broken controllers more than CeeDee Lamb. All anyone would have to do is just throw the ball in Lamb’s general direction and watch him pull down everything. Triple covered? No problem, Lamb will climb the ladder and pluck the ball right out of the air, resulting in first down after first down. Not to mention his ability to roll off of would be tacklers — especially against Texas.

Not getting to play as record-setting quarterback Baker Mayfield in NCAA Football is one of the great regrets of his time in Norman. His ability to wiggle away from defensive lineman, his accuracy and his arm strength would have made him a human cheat code in the game. Imagine how fun it would have been to recreate the arms race with Patrick Mahomes in Big 12 play! Why stop at 5,000 yards when you can shoot for 10,000 in a single season? Plus, plant your own flags in every stadium in the country. Reliving the Mayfield experience would have been a highlight for any Sooner fan.

Just close your eyes and imagine. You’re down three points with under a minute left in the game. A wide receiver comes open across the middle on a simple slant, he plants his foot and turns upfield and suddenly there’s green grass in front. Gus Johnson fills your speakers (yes pretend the announcers are from FOX for the purpose of this exercise) with a shrill “HOLLYWOOD!” Perhaps the most explosive player of the Lincoln Riley era never got his time in the sun in video game form. Marquise Brown would have been the most exciting playmaker with his breakaway speed and quick cutting in the open field, and defenses (much like on the real football field), would hardly stand a chance.

There have been few players more dynamic to ever grace a college football field than Kyler Murray. He would have fit perfectly into the strategy of calling a passing play, just rolling your quarterback out of the pocket immediately and letting the chips fall where they may. The biggest challenge fans would have playing as Murray might be convincing him to stay his senior season to double the fun. If not, the true challenge of setting the single season passing and rushing record would have been a reasonable goal — or maybe just seeing how many hits you could take with Murray while running the ball before having to turn to the backup.