Josh Heupel got goosebumps as he described the atmosphere at Neyland Stadium during his introductory press conference.

“That’s an electric stadium,” the new Tennessee football coach said. “I cannot wait to walk out to that, post-COVID next fall, and hear ‘Rocky Top’ being played as we’re running out.”

Heupel, was hired Jan. 27 to replace the fired Jeremy Pruitt, experienced that atmosphere as Missouri’s offensive coordinator in 2015.

Now, it’s among the pitches Heupel can use on the recruiting trail with the February signing period beginning Wednesday and beyond. But Heupel can go beyond the typical recruiting strategies centering on UT’s history, passionate fan base, and facilities

Here are three things Heupel can sell in recruiting as he tries to rebuild Tennessee:

Heupel’s offense at Central Florida almost doubled Tennessee’s production. His 2020 offense scored 42.2 points per game — his lowest scoring offense in his three seasons with the Knights.

Heupel’s pitch to recruits should start with that: He will bring life into Tennessee’s offense, which has not been a reliable scoring unit since 2015.

Offense is the way to win, and recruits on that side of the ball want to be utilized aggressively.

UCF ranked in the top eight nationally in scoring offense in each of Huepel’s three seasons. Heupel also led UCF to back-to-back top-10 passing seasons in his final two years. The Knights passed for 316.7 yards per game in 2019, and 357.4 in 2020 to rank fourth nationally.

Heupel has a long track record of recruiting and developing quarterbacks. According to 247Sports, Heupel’s top four all-time recruits were quarterbacks. He is credited with recruiting six four-star quarterback recruits, all of whom started at some point in their college careers. 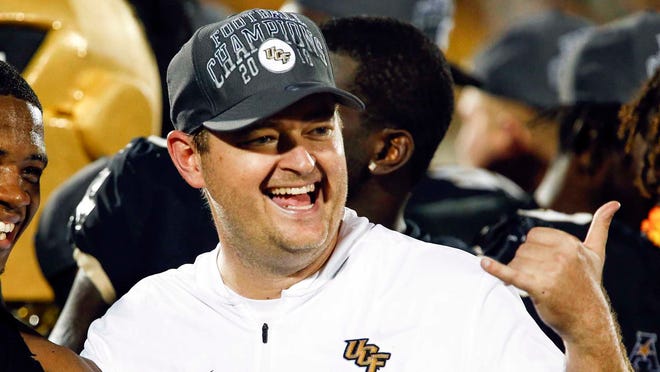 Most notably, Heupel coached Sam Bradford at Oklahoma. Bradford won the 2008 Heisman Trophy and was the No. 1 overall pick in the 2010 NFL Draft. He also recruited and coached Landry Jones, who started 53 games at Oklahoma from 2009-12. Jones was a fourth-round NFL draft pick.

At Missouri, he coached Drew Lock, who gave Tennessee fits in his career before he was picked in the second round of the 2018 NFL Draft by Denver.

In 2018, Heupel worked with McKenzie Milton, who was groomed by former coach Scott Frost.  Milton led the Knights to an 11-0 start but he suffered a knee injury that has derailed his career. He also turned Dillon Gabriel into a standout performer who led the nation in passing in 2020.

As Tennessee resets the program for the sixth time since 2008, playing time will be readily available. Tennessee has lost six transfers to Power 5 schools out of its 16 players to enter the NCAA transfer portal since Dec. 1.

Heupel can sell playing time at every position quickly, especially if linebackers Quavaris Crouch and Henry To’o To’o ultimately transfer and do not return to Tennessee.

Beyond playing time, Heupel can sell something else — something that To’o To’o and others in the 2019 recruiting class highlighted as freshmen. He can sell the chance to rebuild a once-great program into a competitive football program.

Heupel already stressed that opportunity to players currently at UT.

“I’m saying to them, you have the chance to be an elite football program,” Heupel said. “The tradition says that it should be. It’s our job to get it back to that level.”

Heupel could face obstacles in that endeavor depending upon the outcome of the investigation into allegations of major recruiting violations committed by the previous staff.

But he has plenty to sell regardless.

“That’s the great thing here, you have a national name with a national logo that allows you to go coast-to-coast to attract the biggest, the best and the brightest,” Heupel said

Mike Wilson covers University of Tennessee athletics. Email him at [email protected] and follow him on Twitter @ByMikeWilson. If you enjoy Mike’s coverage, consider a digital subscription that will allow you access to all of it.