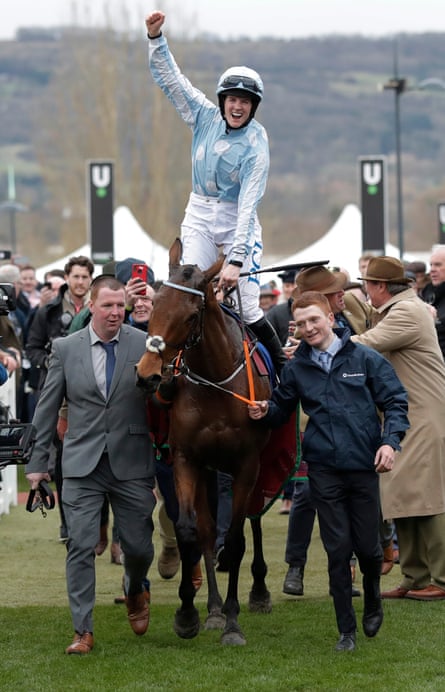 Two Gold Cup-winning jockeys got a lesson in tactics from Rachael Blackmore, who pinched the Mares Hurdle with a decisive move around the home bend on board Honeysuckle. Cheltenham’s favourite female jockey was delighted to get a winner on day one, having been the subject of very high expectations in recent days because of the quality of horse she now gets to ride.

“Sometimes the ball bounces in your favour,” was Blackmore’s modest verdict in the winner’s enclosure. But she fully earned her luck with the patience she showed in tracking Stormy Ireland to the home turn, knowing things would open up in the straight. When that rival drifted away from the rail under Robbie Power, Blackmore and Honeysuckle were through in less time than it takes to describe, showing some of the pace that won them the Irish Champion Hurdle last month.

Benie Des Dieux was a strong favourite, sent off at odds of 4-6 by a crowd convinced she was the better of these two classy mares. While that money was lost, many of her backers will take some convincing that their assessment was wrong considering the remorseless way Benie Des Dieux pounded up the hill, closing to within half a length at the line.

The damage had been done on the approach to that bend when Paul Townend, who had been tracking Stormy Ireland, lost his faith that a gap would come and switched Benie Des Dieux out to be sure of a clear run. So often the result dictates interpretation; it might have been hailed as a smart move if Benie Des Dieux had got home in front.

Her trainer, Willie Mullins, was not happy with either Townend or Power, whose mount was also a Mullins runner. “I just think there was a miscommunication turning for home,” he told Racing TV. “Maybe Robbie thought one of our horses was behind him, rather than Honeysuckle. It looked like he just gifted the winner a huge gap, while Paul was going on the outside.

“There you are. Things happen. Stormy probably didn’t go fast enough. She should have been going much faster to take the sting out of the rest of them. A little frustrated, but we’ve sound horses, sound jockeys, so hopefully we’ll get a turn at some stage.”

Since Mullins came here as the most successful trainer in Festival history with 65 wins, it could be said he has already had plenty of turns. But this was not a successful start for the Mullins/Townend combination in their first year since Ruby Walsh retired. Mullins saddled 10 runners, including three favourites, and did not make it to the winner’s enclosure.

Working for ITV, Walsh evidently saw things the same way as his old boss. Analysing the replay, he said Townend should have nudged Stormy Ireland and Power back towards the rail before Honeysuckle had a chance to nip through. “That’s a saving of two lengths,” he said.

Blackmore played down her part in the victory but made no secret of the pleasure it gave her. “I got some kick out of that,” she said before lavishing praise on her mount. “To be in the position I’m in, with the rides I have, is every jockey’s dream. I’m going to try to make the most of it.”

The outcome was an echo of a now famous pony race, the thick end of 20 years ago, in which she beat Townend’s mount by a nose. Townend is still favourite to end the week as top jockey, at a slightly uneasy 3-1, but Blackmore is just a point bigger.

While the action on the track was as thrilling as ever, with three finishes decided by half a length or less, there were fewer in the stands to see it. The first-day crowd was 60,664, down 11% on the record figure set last year. Course officials blamed the coronavirus, which created significant uncertainty over the past 10 days as to whether the racing would go ahead at all.