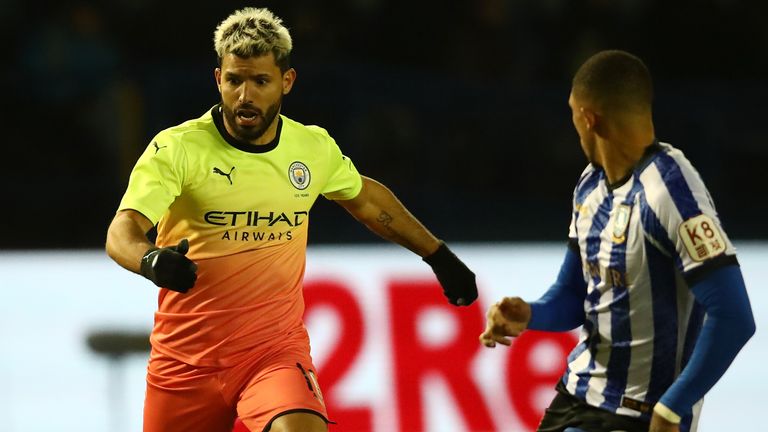 Manchester City had to settle for a narrow 1-0 win in dominating Sheffield Wednesday to move into the quarter-finals of the FA Cup.

The reigning holders were frustrated throughout the first 45 minutes but Sergio Aguero found the breakthrough in the second half to secure a trip to Newcastle in the last eight.

Although Wednesday avoided a beating, Pep Guardiola’s side were rarely tested at the other end and now go into Sunday’s Manchester derby on the back of five straight wins.

Man of the match: Dominic Iorfa

How Man City progressed to the quarters

Garry Monk’s side have been in dismal form in the Championship having lost eight of their last 13 games in the competition since Christmas, although this was a different sort of test.

The pressure was near constant from the outset with Manchester City allowed to pass the ball freely until they reached the edge of the Sheffield Wednesday penalty area.

Inevitably, the first chance fell to Aguero but he failed to connect properly with Benjamin Mendy’s low cross at the near post when he had time to take a touch.

The Hillsborough crowd were cheering every blocked shot as their team defended stoutly but while City were far from fluent the opportunities continued to come with regularity.

Gabriel Jesus headed wide at the far post midway through the first half and Riyad Mahrez blazed the bouncing ball high over the bar when well-placed soon after.

Aguero and Jesus do not play together too often but they connected well when the Argentine showed wonderful vision to find his team-mate only to see him scuff the volley.

The closest that City came to a goal in the first half was when Nicolas Otamendi’s header came back off the crossbar, although John Stones went almost as close with one of his own.

The problem for Sheffield Wednesday was that they could find no way to relieve the pressure. One mazy run by Jacob Murphy ended because there was so little support.

Sheffield Wednesday made four changes from the team that were beaten by Derby County at Hillsborough at the weekend with star striker Steven Fletcher among those dropping to the bench. Key defender Dominic Iorfa returned to the starting line-up.

Manchester City made six changes to the team that won the Carabao Cup final on Sunday with scorers Sergio Aguero and Rodri retaining their places. Riyad Mahrez, Bernardo Silva and Gabriel Jesus were among those who returned to the starting line-up.

Even so, restricting City to zero shots on target in the opening 45 minutes offered some hope – but the parity did not last long into the second half thanks to Aguero.

Mendy struck the woodwork soon after the restart but it was his pass to Aguero that brought the breakthrough, the striker’s left-footed shot squirmed beyond Joe Wildsmith.

City were perhaps fortunate that VAR was not in operation at the Championship club’s ground because Aguero’s right foot might have seen the goal ruled out for offside.

The pattern of the game did not change even with City in the lead. Monk brought top scorer Steven Fletcher off the bench but the ball rarely left the Wednesday half.

Mahrez saw a right-footed shot saved from a narrow angle before Wildsmith did well to deny Stones and Rodri in quick succession from the resulting corner.

Wednesday’s defence deserve credit for sticking to the task with Dominic Iorfa particularly impressive and that was enough to ensure they were still in the tie in the latter stages.

15 – Since Pep Guardiola joined Manchester City ahead of the 2016-17 season, the Spaniard has overseen 15 victories in FA Cup matches (D1 L2); at least five more wins than any other manager over this period. Advance. pic.twitter.com/AY3jgmQ9Ur

With the crowd roaring the home side on, Fletcher almost got a foot to a cross and when Claudio Bravo needlessly conceded a corner the hopes were raised again.

Guardiola promptly sent for Raheem Sterling and the substitute had a chance to double the lead in stoppage time only to see Wildsmith produce another good stop to deny him.

Ultimately, when it was all over, the Owls had mustered only one shot all game and – as expected – it was Manchester City who took their place in the quarter-finals.

Sheffield Wednesday manager Garry Monk: “”The players did exactly what I asked and delivered it at a very good level. Overall, we’re disappointed to lose the game to a goal that should have been offside, I would rather have lost it to a goal that was more legitimate. What is strange is having VAR in some grounds and not others, but I am not complaining. Credit to them, they are a fantastic team. I’m disappointed with the result but very pleased with the level of commitment.”

Man City boss Pep Guardiola: “We spent a lot of mental energy in the last games and then came here. But the players were absolutely ready, we didn’t concede one shot on target and that means a lot for our capacity to read the game. At the end we scored a goal and could have scored much, much more.”

Sheffield Wednesday face a daunting trip to promotion-chasers Brentford on Saturday, while Manchester City have an extra day to prepare for a huge match of their own. City travel to face Manchester United at Old Trafford live on Sky Sports this Sunday.