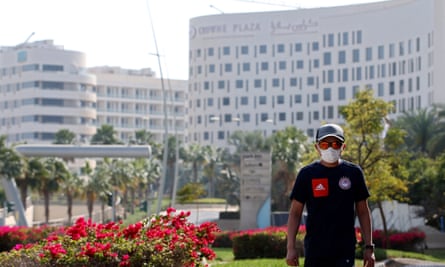 The Italian government has confirmed that all sporting events must be staged behind closed doors until 3 April, affecting England’s Six Nations matches against Italy in Rome and all Serie A games, after the country’s death toll from the coronavirus passed 100.

There was no immediate confirmation from rugby union authorities about whether either of England’s men and women’s matches on 14 and 15 March will go ahead but the announcement means 20,000 England supporters will now not be making the trip unless the games are postponed.

That remained a possibility on Wednesday night, with Six Nations organisers yet to make a decision on whether to play the matches behind closed doors. ITV is reported to have decided not to send a commentary team to Rome, even if the men’s game goes ahead, with the broadcast to be based in London instead.

Schools and universities throughout Italy have also been closed until 15 March after a further 28 people died on Wednesday from the outbreak, with the government decree concerning sports events later ratified by the prime minister Giuseppe Conte. It means all sporting fixtures are suspended for 30 days and can be staged only behind closed doors if in “closed structures”, with all events due to take place in northern Italy’s red zones cancelled.

“Sports events and competitions of all kinds and disciplines, held in every place, both public and private, are suspended; however it is permitted to carry out the aforementioned events and competitions behind closed doors, or outdoors without the presence of the public,” read the decree. “In all such cases, the associations and sports clubs, by means of their medical staff, are required to carry out the appropriate checks to contain the risk of spreading the Covid-19 virus among athletes, technicians, managers and all accompanying persons who participate.”

Italian football has already been strongly affected by the impact of coronavirus, with a growing number of postponed matches that include the Coppa Italia semi-finalsthis week. So far 10 Serie A games have been delayed, as well as the two Coppa games between Juventus and Milan and Napoli v Internazionale. In cycling the Strade Bianche, Milan-San Remo and Tirreno-Adriatico all appear in difficulty after teams began asking to drop out.

Mitchelton Scott said they would “withdraw its teams from the next period of racing” including all three Italian races.

“We, as team doctors and the wider team, have a duty of care to protect health and wellbeing of all our riders and staff,” the team said, citing an inability to influence measures taken to preserve athlete health as a reason for their decision. “We will not have any input into, or control over, the measures that race organisers may or may not put in place to manage the Covid-19 risks.”

The American men’s team EF Pro Cycling have also written to the Union Cycliste Internationale asking to withdraw from all three races, according to reports in the Wall Street Journal. The Dutch women’s team Parkhotel Valkenburg will not be taking part in the Strade Bianche. This week RSC Sport, the organiser of all three Italian races, had insisted they would go ahead.

Several cycling teams remain under forced quarantine in an Abu Dhabi hotel. Members of the French teams Cofidis and Groupama-FDJ as well as the Russian collective Gazprom, including 18 riders, have been confined to the fourth floor of the Crowne Plaza since last Thursday.

The United Arab Emirates health ministry said on Tuesday that six new cases relating to the cycling event had been discovered. They were identified as Russian, Italian, German and Colombian nationals but it was not clear if they had been confined to their hotels.

In a statment FDJ said: “All of our riders and staff in the UAE have been tested negative for Covid-19. Still several positive results – not involving our team – have been reported inside our hotel.”

Away from the immediate effects officials have been striking more confident notes about the prospects for the Olympic Games this summer. The International Olympic Committee president, Thomas Bach, spoke bluntly on the subject following the second day of the IOC’s annual meeting in Lausanne. “I can tell you that today … neither the word ‘cancellation’, nor the word ‘postponement’ was even mentioned,” he said. “Of course we are a responsible organisation and this is why we have a joint task force, which is having regular meetings, but we are not speculating on any kind of future developments.”

Bach’s remarks were echoed by the head of the British Olympic Association, Andy Anson, who told BBC Sport: “It is not affecting our plans in any way, in that we are absolutely focused on getting the team to Tokyo for the Olympics in July and everyone is obsessed with that, that is the number one focus. At the same time we are getting information from all the relevant bodies, so we have got the most up to date information on coronavirus, and it is changing every day as you can see with the news stories.”