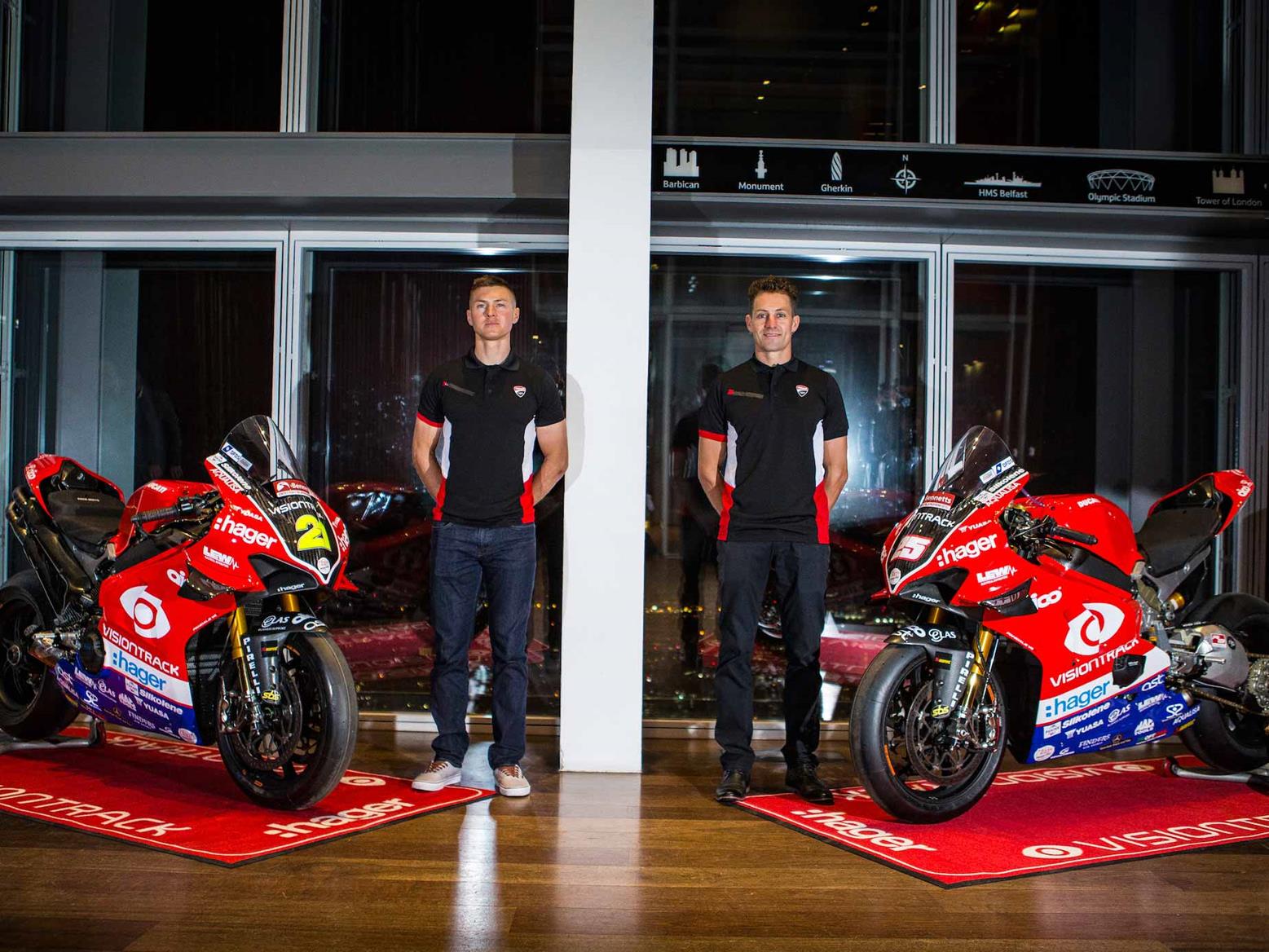 The new-look team was unveiled in a special event held at The View from The Shard in London on Monday evening. VisionTrack have taken over as title sponsors from Be Wiser, who were with the team for four seasons – overseeing three titles during that time.

The new sponsorship deal means a fresh look for the team’s factory-backed Ducati V4 R machines. The 2020 livery remains primarily red, however, this year’s bike features blue and white as well. The VisionTrack logo replaces the owl logo that represented Be Wiser for the last few years.

Team owner Paul Bird was joined by riders Josh Brookes and Christian Iddon at The Shard. Brookes finished second to teammate Scott Redding last year, with the pair dominating the series. Between them, Brookes and Redding won 21 of the 27 races in 2019. As a result, Brookes became the third most successful rider in BSB history with a total of 49 wins. He’s now only one victory behind Ryuichi Kiyonari in the history books.

“We had an almost perfect year last year,” Brookes said at last night’s event. “I won 10 races in the season and I was only five points off winning the championship, so there’s only a small margin of change that will be need to go better.

“I felt like last year there was a lot of work to be done. There was a lot of pressure on us with this bike being brand-new last year. Ducati, from a motorcycle supplier’s perspective, were put under a lot of pressure and expected the bike to perform straight away. As a rider you feel like you carry that expectation but having won the title with that bike last year, it takes that pressure off and we can just focus on our day-to-day job.”

Meanwhile, Iddon joins the team after securing the Rider’s Cup with Tyco BMW last year. The opportunity with VisionTrack Ducati gives Iddon a fantastic opportunity of achieving his first victories in BSB. Iddon has 12 BSB podiums to his name and has finished just outside of the Showdown on two occasions, in 2017 and 2019.

“I’m in a privileged position really because last year the team finished first and second, and the bike finished first, second and third,” Iddon said. “Josh, as is stands, is the best rider in BSB because you have to go off last year’s positions, so I’ve got a great team around me and I’m fortunate because last year the team did a lot of work doing the really big stuff and now it’s just about fine-tuning.

“I’ve got big aspirations for the year. You never know until you get to round one, but I’m confident in myself and I’m more than confident in the team.”

VisionTrack Ducati head to Spain next week for the first official pre-season test at Monteblanco.